All of our vets aim to provide the highest standards of treatment for your pet. We work closely as a team to ensure real continuity of care. 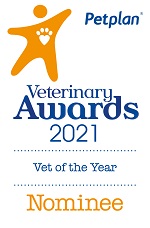 Mike qualified from the Royal Veterinary College in 1997 and has been at Brookend ever since. In 2009 he became a partner with Alison and took over full control of the practice following Alison’s retirement in 2014. He enjoys all aspects of general practice and is especially interested in orthopaedic surgery. He enjoys spending his time off with his young family. Mike has played rugby for Witham, and loves travelling to watch the Welsh rugby team in action.

Rebecca qualified from Edinburgh University in 1997, she has been part of the team at Brookend since 2002. Rebecca has a keen interest in exotic pets and general medicine. She loves spending time with her two boys and going for long walks with her dogs.

Alan qualified from Glasgow University in 1993. He has worked at Brookend for a total of 14 years, returning in after a period locuming around the country. Alan is a very experienced small animal vet and enjoys all aspects of small animal practice. He has special interest in Surgery and dental work.

Connor graduated from the University of Veterinary Medicine Budapest in 2018 and joined the Brookend team one year later. He has a particular interest in diagnostic imaging but also enjoys surgical work. Outside of practice, Connor enjoys music, gaming and walking with his dogs.

At Brookend our team of qualified veterinary nurses will look after your pet from the moment they arrive until they return home.

The nurses provide regular clinics for: 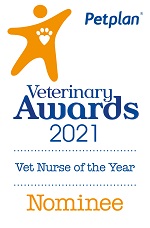 Katie is our head nurse. She qualified in 2004, training at Brookend and Writtle College, having joined us as a school leaver. She enjoys leading the Brookend nursing team. Katie has extensive knowledge of dog behavioural problems and runs regular nursing clincs.

Sharon is a qualified veterinary nurse and has worked at Brookend since 1992. She has the specific jobs of dealing with the many insurance claims we process, and stock control, but whenever possible she still enjoys some patient contact, and watching interesting operations. Sharon's hobbies are dog walking and cross stitch. 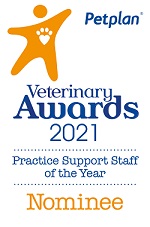 Kim has been at Brookend since leaving school in 1995. She enjoys the day to day interaction with the animals and has a particular interest in hand-rearing newborns. Kim's hobbies include reading, and spending time with her friends and families, she has recently rediscovered her love of horse riding along with her daughter.

Rachel graduated from Leeds University with a 1st class honours in animal nutrition and physiology. She initially came to Brookend in 2009 as maternity cover before becoming a permanent member of the team. She has a special interest in pet rabbits. Away from work most of Rachel's spare time is taken up by her two daughters but loves cycling when she gets the chance.

Sarah has been nursing since 2000 and joined Brookend in 2012. She is our practice 'midwife' having recently complete a course in the care of puppies and kittens , pregnant and birthing pets.

Helen qualified as a veterinary nurse with honors in 2012. She joined Brookend last year heads our cat care clinics including our new cat only clinics and feline blood pressure monitoring. Helen lives with her boyfriend and two guinea pigs, away from work she enjoys spending time with her family and friends and reading.

Nicola is the latest addition to our nursing team, she qualified at the College of Animal Welfare in 2013. At work she is especially interested in radiography and cat nursing. In her spare time Nicola enjoys camping and obsessed with her two cats Arthur and Ernie.

Becca qualified in 2018 after completing her training with Writtle College University. She takes a special interest in feline medicine, hypertension and diabetes. She has 3 cats of her own, all rescued since starting as a student nurse. Outside of work she enjoys spending time socialising with her family and friends.

Hollie qualified as a Registered Veterinary Nurse in 2020 after completing her training with Writtle College University. She has a passion for nursing hospitalised patients and critical care needs. Hollie previously specialised in Avian Nursing ( particularly Racing Pigeons) and Microscopy. She takes a special interest in animal conservation after nursing on an African Reserve.

In her spare time, she enjoys socialising with friends and family, beach and countryside walks.

Helen joined our reception team in 2014 and was promoted to Practice Manager in 2017. Helen loves to spend time with her family and enjoys music, singing, theatre trips, cycling and a good box set!

Mary is another very longstanding member of staff having joined the surgery in 1988, even before it became Brookend. She enjoys talking to the clients and has completed four customer care courses. She is also a qualified nutritional advisor.

Karen has been with the team since 2004 when she joined an office administrator in 2011 she was promoted to practice manager. She has completed her Veterinary Practice Administration Certificate. Karen recently decided she wanted to spend more time with clients and staff so has moved to reception. Karen owns Tigger the cat after adopting him when he was abandoned at the surgery with 2 broken legs when just 3 months old.

Margaret joined the practice in 2005. She is very involved Guide Dogs for the Blind, she is a puppy walker for the charity and has taken on two retired guide dogs. Her main interests are football and tennis, and she is an obsessive Chelsea FC fan. As well as her reception role Margaret also manages the charity work at Brookend.

Jenni has been part of our reception team for over 10 years. She is in her element when greeting the new puppies and kittens. She enjoys family outings with children and black lab and has recently taken up horse riding again.

Coral is the latest addition to our reception team. She qualified as a Registered Animal Medicines Advisor in 2017 and has a keen interest in parasites in small animals! Coral won the Petplan Rising star of the year award in 2016.

Coral has a Jack Russell named Ben that she adopted from Wallace Kennels in 2016 and enjoy’ s trick training and agility! Coral enjoys horse riding and owns two ponies called Bella and Buster, enjoying competing with Buster in Cross Country and Jump cross, and pampering Bella who is now retired.

Jill joined Brookend in April 2017 after a long career in finance. She has a love for all animals (except Snakes!) and currently has many pets at home including Dogs, Cats, Rabbits and a parrot. Jill has an exceptional love of horses.

Anne joined our reception team in 2018. She loves greeting the clients and their pets. Anne has completed the Competent Veterinary Dispenser Award, her goal being to complete her Silver receptionist award. In Anne’s spare time, she enjoys long walks with her two dogs, listening to country music and yoga.

"Rebecca & Charlotte. Thank you for your kindness and the wonderful care you took of Bobby. He is feeling so much better! I just wanted you to know" ... [Click here to see more]
Jo Bowser

"They are the best vets we have ever been too. They always go above and beyond for our dogs - even though one doesn't like them very much!" ... [Click here to see more]
Tresta Mason

"Brilliant vets, always so patient with my dog, who is a bit of a nightmare for them. He recently underwent major surgery, and Mike (the vet) was amazing" ... [Click here to see more]
Jane Smith

"This is the best vets in Witham! My young cat was hit by a car 2 years ago , she was badly hurt, all the staff at brookend gave her the best care" ... [Click here to see more]
Carol & Emily

"Dear Rebecca and your lovely team, Thank you so much for looking after Max (Fat Boy) and us after his recent trauma! Your kindness and reassurance" ... [Click here to see more]
Rebecca Bixby

"Dear Rebecca. Thank you for everything you did for Bailey! I knew that he was always in good hands and loved coming to see you for cuddles!" ... [Click here to see more]
Sheila and Derek Gilder

"Dear Mike and staff. Thank you for the care you have given Bobbie and your kindness to us over the years, especially this week. Best wishes" ... [Click here to see more]
Clara and Stan

"Dear Rebecca. Thank you for your Kindness and sympathy regarding our much loved Jim. To our family you are not only a 'super vet' but also" ... [Click here to see more]
Mr and Mrs Nickerson

"Dear Mike and Everyone at Brookend. We would like to take the time to thank each and everyone of you for the care you gave our beloved Alfie" ... [Click here to see more]
Mrs S Blythe

"Dear Mike. Thank you for the kindness and wonderful care you took of my lovely Where R U (Tiddly). Sometimes I called him 'Superpuss'" ... [Click here to see more]
Dawn and Mark Chinnery

"Dear Mike, we would like to thank you and the entire Brookend team for the loving care, treatment and expertise given to Casper over the years" ... [Click here to see more]
Mrs Julie Harris

"Dear Rebecca. The kindness and compassion you show makes a huge difference. Just brought Faith home and feel so lucky that she might be OK. When you" ... [Click here to see more]
Clare and Sid Hawes

"To Mike and all the staff at Brookend, we just wanted to say a huge thank you for looking after Nell.... you have been kind thoughtful and patient" ... [Click here to see more]
Kerry Phillips

"To Rebecca, the vets, nurses and staff. Thanks you for all of your help with Kia, my little ferret. You made a big difference to such a tiny girl." ... [Click here to see more]
Mr & Mrs Hansell

"To Alan, Please accept this as a thank you for the wonderful work you did for our little dog Tilly. You have made her life so much better" ... [Click here to see more]
Peter & Debi Howlett-Morley

"To the lovely staff of Brookend Veterinary Practice, thanks you for your kindness and empathy, even though we were not your clients." ... [Click here to see more]
David and Sally Orrin

"Dear Alan, We wanted to say thank you for the care you gave Rosie. Your kindness was so appreciated and there is not much more to say but many, many thanks." ... [Click here to see more]
Paul Duvoisin

"Dear Mike, thank you for the great care you gave Charlie right to the end. I am so grateful, it made a huge difference. I would also like to thank your fantastic staff who have always been so helpful to me." ... [Click here to see more]
Rocco and Claire

"I can't thank you enough for all you've done for Rocco. You've taken such amazing care of him and I never thought I would be bringing him home. I've had animals all my life and have never known a vets as thorough, compassionate and efficient as yours. Thank you." ... [Click here to see more]
Chris and Val Ling

"Thank you so very much for taking care of our precious Lucy. Your advice and kindness was invaluable." ... [Click here to see more]
Janine, Sue and Laura Gilbank

"A huge thank you for all you did for Diesel. Diesel actually liked coming to his appointments at the vets! He was a wonderful dog and we are so grateful for the swift diagnosis and excellent treatment he received." ... [Click here to see more]
Amanda, Tony and Poppy Lucia

"Thank you so much for all your kind help and support to ourselves and Roodie throughout his treatment." ... [Click here to see more] 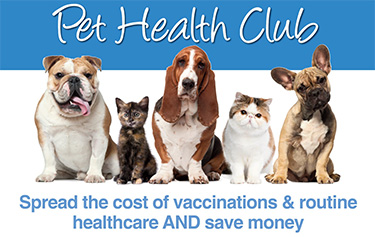 
Veterinary Professional Use Only